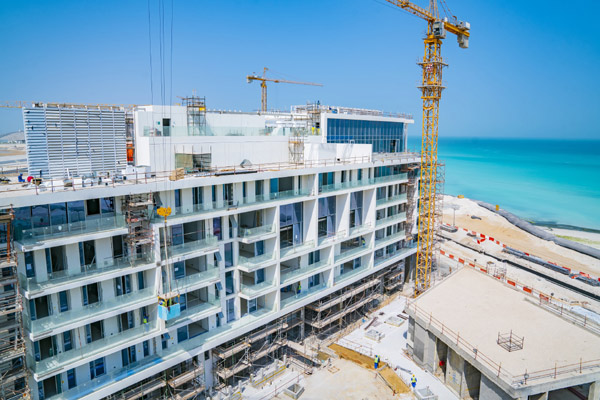 Leading UAE developer Aldar Properties said work on its master-planned community, Meera, coming up on Reem Island in Abu Dhabi, has reached its finally stages and the project is on track for handover during this quarter.

Also on Reem Island, subcontractors have now been appointed for all necessary works at The Bridges, Aldar’s six building development launched in April 2017, stated Aldar, while providing the latest quarterly update on its projects under development across key destinations in Abu Dhabi.

The Emirati developer said slab work and blockwork was progressing well on the three buildings in Phase One while excavation work is almost complete on the remaining three buildings, it added.

On the progress being made at Yas Acres, Aldar said show villas were now complete and open for viewing at the flagship golf and waterfront development on Yas Island.

Structural works on all 652 launched villas are almost complete and main utility networks are finished, it stated.

Aldar said Yas Acres will begin handover of the units to customers next year, thus expanding the existing residential population on Yas Island following the handovers of Ansam and West Yas.

Mamsha Al Saadiyat, the 1.4-km mixed-use project at the Saadiyat Cultural District showcased at October’s Cityscape Global, is on track for handover next year, said the Abu Dhabi developer.

Building façade works at the luxury beachfront residences are substantially complete across all buildings and MEP and finishes work are entering the latter stages of completion, it stated.

Interior finishes on the 83 four-to-six bedroom townhouses and villas are under way and the show villa is nearing completion, it stated.

The extension of Al Jimi Mall in Al Ain, which will add 45,000 sq m of gross leasable area, is on track for an imminent opening, said the Abu Dhabi developer.

Final approvals are now under way for the city’s first outside “Retail Park” concept which will feature 88 new stores and Al Ain’s first eight-screen Vox Cinema, it added