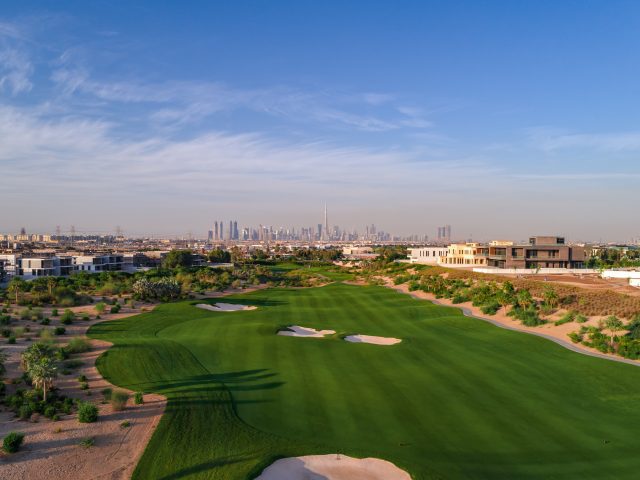 European Golf Design’s newest project, Gil Hanse on Les Bordes, and why a Marrakesh classic is getting an upgrade. Chris Bertram rounds up the best course news of the last month.

A first look at Dubai Hills

There is no doubt plenty of courses in the Middle East fit into the “pleasant but not outstanding” category, making it hard to justify the extra flight time and expense to eschew Europe and head there for a golf break.

Two years ago Gil Hanse’s Trump Dubai opened and it offers something different to the other courses in Dubai.

Fewer than two years later, the emirate has another stand-out course in its portfolio: Dubai Hills.

Designed by Gary Johnston of European Golf Design, it incorporates the in-vogue philosophy of generous fairways – the signature 5th must be 150 yards wide – to help everyone get the ball in play but the closer to the green the more exacting it is. 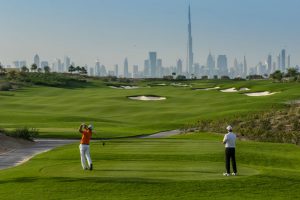 It is interesting and fun, with plenty of variety to the holes – a failing of several older Middle East courses.

Conveniently located close to the heart of the city, and just 15 minutes from Dubai Desert Classic venue Emirates GC, the front nine is the premier half.

It is full of strong holes and sits a little lower than the residential units that surround much of the course because more material was cut out of the existing land to shape the holes. In total, a million cubic metres of earth was moved

As a result, there is more of an amphitheatre feel to its holes and a little more movement in the fairways.

The course has only been open two months but its paspalum fairways and greens are already entirely pleasing to strike iron shots from and hit putts on.

It is clearly immature but impressively dense: Troon agronomy expert Sean Kinsley works on site and is pleased with the conditioning, even if he is seeking more evenness to the colour – a lack of which is a common trait among young paspalum.

A gentle opener and a nice par 3 get things underway before a risk-reward par 4 of 320 yards at the 3rd. It is a cool hole with a lot of movement in the green, which is typical of the surfaces here.

There is bags of room up the left but an angled bunker separates fairway from green to make things awkward. A strong ridge across what is one of Dubai Hills’ largest greens means if you get on the wrong level, you are very much entering three-putt territory.

The dogleg 4th asks for a medium-to-short iron approach from another generous fairway and then comes the strongest stretch visually and strategically.

The 5th is a straight-up-the-hill par 5 and will be viewed as the signature hole, with the Burj Khalifa in the background; it is apparently a fine sight played early morning or late afternoon with the Burj catching the sunrise or sunset light.

The 6th is another short par 4, just 310 yards from the back tee and how you approach it is likely to be dependent on the wind.

There is another strong ridge across the green and already you realise that the front pin position can be the toughest at Dubai Hills, because if you get above the hole with your approach it is so slippery from there.

The 7th sees a long bunker snake up the right side, which Johnston latterly pondered turning into a lake after seeing water standing in it after some rare overnight rain in Dubai.

The 8th asks you to find one of tighter fairways with water along the right all the way to the green and in play on every shot.

It is a great driving hole for all standards because strong players can try to cut off as much of the hole as possible whereas higher handicappers can happily aim away from the water at the distant left-side bunkers.

Water is actually in play on the last two holes on both nines, with the 9th and 17th long par 3s over water. The latter is an especially fine-looking short hole, the slim green hard next to the water on the right – so even if you bail out left you then have a nervy chip towards the water.

There is a strong par 4 to finish, with drive bunkers followed by an approach to a lakeside green.

Les Bordes is one if the most illustrious names in Continental European golf by virtue of its exclusivity and interesting backstory.

Created by the founder of the Bic pen and razor empire, it has a course – by charismatic American Robert Von Hagge – that has been regarded as the finest on the continent.

It is certainly a stringent and well-groomed challenge, but it soon might not even be the best course on the property. 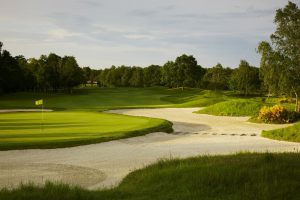 That is because construction has just begun on a second course at the club, with Gil Hanse the architect. It could be open as early as 2020.

While Von Hagge’s is very definitely an American-style course, American Hanse has something more English in mind.

The site is sandy and the man behind Castle Stuart and Trump Dubai has found heather growing naturally on the site, so is excited about the prospect of creating a stellar heathland in France.

“I’ve always loved Morfontaine and this site gives me the chance to do something a little similar to that,” he said.

“It will be very different to the existing course which will be ideal for the members I think, to have a contrast. We are very excited about what we can create here.”

Hanse expects to relocate to France with his wife for as many as three months during the build.

I have played the original course and know where the new one will be. I have also seen enough of Hanse’s work to predict this is an instant continental top-20 course.

If you have been to the Red City then there is a fair chance you have played at historic Royal Marrakesh. There are lots of courses to choose from, but it is the oldest and one of the best.

It is actually one of the oldest in Morocco, having been inaugurated by the Pasha of Marrakech, Hadj Thami El Glaoui Mezouari, in 1927, when it had four holes.

Its pedigree is enjoyable but two years ago it felt a little tired and lacked variation. The club appear toagree with that sentiment because it has hired architects Stuart Hallett and Jonathan Davison to carry out a renovation. 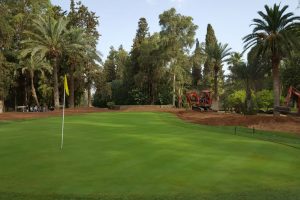 France-based Hallett and Davison, who lives in Prague, will redesign all the bunkers to add more of a strategic element.

“We are trying to eliminate the repetitive nature of the course. All the bunkering will be reworked to give more strategy and definition and to give each hole its own identity,” Davison said.

“All the fairways will be redesigned with the benefit of a new irrigation system and we will clear and relocate a few trees where possible.”

Three holes have already been renovated and the project should be complete by summer 2020.