After a barren six years for golf club openings, the UAE has just welcomed its third new course in three years. Dubai Hills Golf Club, the centerpiece of the Dubai Hills Estate development, follows in the footsteps of Al Zorah (2015) and Trump International (2017). And despite the difficult economic climate experienced by golf clubs in the emirates at present, Dubai Hills Golf Club is striking an optimistic tone after its inauguration. 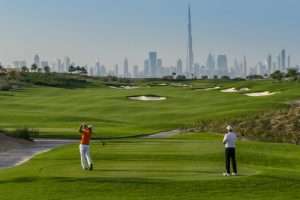 “We are very thankful to everyone who has worked on opening this golf club,” Gray tells Sport Industry Insider. “It has enabled us to make a great first impression. We wanted to get it right from day one – the experience, the feel of the golf course – and we’ve achieved that.

“We’re pitching this course in particular as Dubai’s most iconic golfing destination because you’ve got seven or eight holes with the backdrop of the Burj Khalifa and the Downtown Dubai skyline.

“It’s a great layout. The front nine curves its way through undulating dunes; it is very majestic, almost like stadium golf. It gets flatter on the back nine but we have some really dramatic finishing holes too, with an 18th that gives you that classic risk/reward dilemma.”

Elliott Gray gives us some insight into what are his favourite holes on this iconic golfing destination. pic.twitter.com/c3nkjsrHEK

The risk/reward dilemma is as relevant in the decision to open as it is in the hole design. A downturn in golf club memberships across the UAE in recent years has not deterred Dubai Hills Golf Club and Gray is confident the club has created an appealing model.

“We all know that the Dubai market is a little bit more challenging than it has been in the past but we have an incredibly strong product here,” he explains. “Developers are still attracted to projects centred on golf courses, to that ‘oasis in the desert’ feeling.

“Our first phase of 100 memberships has been accepted very well and we have more than 180 prospective members. The strategy has been put together by a team of us, myself, our sales and sponsorship manager and our golf directors. 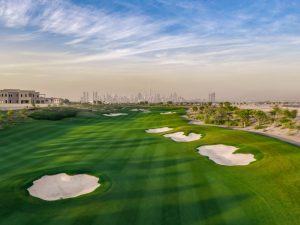 “We have an alignment with Arabian Ranches Golf Club and Address Montgomerie too – so there are the benefits at all 3 clubs – reciprocal rates and use of the driving ranges and Par 3 courses. The added value is members of each club get the best green fee rate at the other courses.”

A major boost in membership is expected when the properties around the golf course begin to become occupied, but that will not be until next May. Gray was responsible for launching Arabian Ranches Golf Club in 2004, and admits that back then the task of attracting members was a little easier given the community around the course already had residents.

“We already had people living close by when we opened Arabian Ranches Golf Club and therefore had lots of potential members moving in every few months – 300 properties were handed over, then another 300 etc…

“However the homes around Dubai Hills Golf Club are fantastic and I’m sure that eventually the community will grow. You can always expect that a greater increase in the immediate population will lead to an increase in the golfing population.” 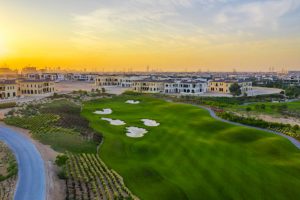 Increasing that golfing population is fundamental to the success of any club and beyond the reciprocal memberships, flexible payment structures should also help attract more players to Dubai Hills Golf Club.

“Flexible payments are a must now and at Dubai Hills Golf Club, we have Emaar Hospitality Group joining arms with Emirates NBD to make that process easier. There’s no big amount to pay up front and payments can be made in installments.”

A high-quality F&B offering is often key to creating a community hub and Dubai Hills Golf Club has two new restaurants to serve that role.

“The F&B is being run by Jumeirah Restaurants Group – Dubai (JRGD), who have some great concepts throughout Dubai. We have a gastro pub called The Duck Hook, which is really close to the 18th green. It’s a great spot to sit out and enjoy the view. Then we have a larger restaurant, too, Hillhouse Brasserie. 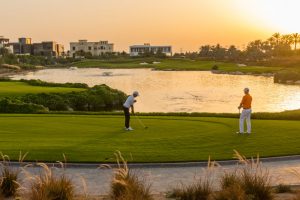 “My experience at Arabian Ranches Golf Club has shown me how important it is to create that community feel through the food and beverage outlets. It makes for a strong model.  People work hard here and don’t want to travel far away for their F&B or their golf. Time is precious.”

Creating a new community and golf club from scratch is no easy task but Gray believes that his success with Arabian Ranches Golf Club – still going strong after 14 years – is a blueprint from which Dubai Hills Golf Club can learn.

“It’s all about community and about creating that traditional club feel, which you don’t always get in the UAE. When we opened Arabian Ranches Golf Club in 2004, that’s what we aimed for and that’s what people like. It’s a bit more traditional – you see people’s names up on the championship boards and the traditional matchplay events.

“We want to recreate that feeling here, to make people feel like they are a part of something special. It doesn’t matter if you are a traditional golfer or a new golfer, though – Dubai Hills Golf Club is an exciting proposition for anyone who plays the game.”