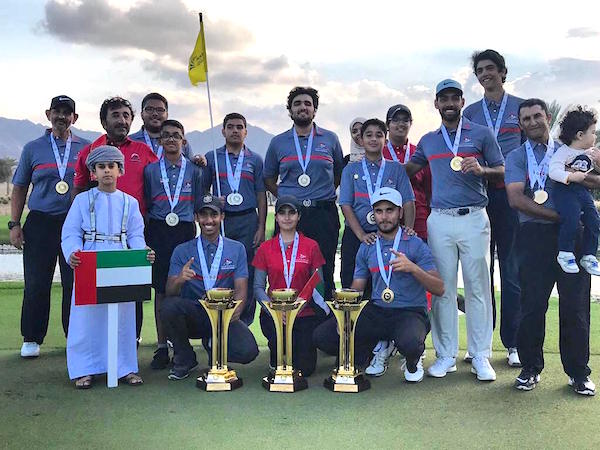 The outstanding results helped UAE finished as the most decorated country at this year’s event.

In the men’s Division, the UAE Team finished in first place. Lead by team captain Khalid Yousuf, who captured the silver medal in the individual category. Yousuf shot rounds of 75-72-73-72 for a championship total of 292, one shot behind than the overall winner.

Last year’s individual gold medalist Ahmed Skaik finished in fourth place this year with a tournament total of 299. Saif Thabet played a key role for the men’s team as his final round 79 put the UAE at the top of the podium by two shots.

Playing in his first international event for the UAE was Daood Jaffal, who finished with a tournament score of 335.

Terming the win as one of the best moments of his life, the Emirati said: “I will always cherish these proud moments. Conditions were hard but I stayed clam and kept my nerves under control.”

Reema Al Heloo was the overall champion in the Ladies Division. This is a great accomplishment for Reema and a strong finish to a long year. Reema has had a challenging past five months balancing school, golf, and family life. With appearances at the Summer Youth Olympics and Asian Games, Reema was firing on all cylinders coming into this championship. Winning the gold medal and finished three shots better than the rest of the field Reema will remember this victory for a long time. Reema shot rounds of 88-85-81 for a championship of 254.

Reema had this to say about her perfect performance, “It was a hard week and winning this championship for the UAE feels great. Being mentally tough helped me secure my victory. I think that my international appearances at the Youth Olympics and Asian Games gave me the confidence to trust my game and decision-making on the course. My approach shots and chipping really made the different this week. With the tough greens, these parts of my game saved a lot of shots for me”.

In the Junior 18 and Under Division the UAE team won the silver medal. Although both Qatar and the UAE both finished with a team score of 502, Qatar won the gold due to their third player’s final round score.

Leading the way and winning the gold medal in the individual category for the UAE Junior 18 and Under Team was Mohamed Adel Al Hajeri. Just like Reema, Mohamed had a busy summer and fall. While making appearances at the Summer Youth Olympics and Asian Games, Mohamed was also on the fourth place finishing team for the UAE at the 2018 men’s Pan Arab Golf Championship last month in Tunisia. This week Mohamed shot rounds of 81-78-79 for a championship total of 238.

“We have been preparing for this event since this summer and having the experience of playing in the Youth Olympics and Asian Games these events really gave me the confidence to compete at my highest level this week. The course was playing tough around the greens but I think my short game was the reason why I played well. I’d like to thank my coaches, my parents, and the Emirates Golf Federation for the support and my team-mates,” said Mohamed.

Having a strong performance for the 18 & Under Team was Rashid Al Emadi. Finishing in fourth place with an overall score of 266, at the age of 16, Rashid will be a top contender in the event over the next few years. Rounding out the 18 & Under team was Rashed Al Qubasis with a tournament total of 273.

For the Junior 15 & Under Division the UAE Team also won the silver medal in the Team Category. Finishing just one shot back from host country Oman the UAE team was lead by Obaid Al Heloo. Obaid finished with a score of 251 over three rounds while collecting the silver in the individual category.

Having solid performances in their debut event were brothers Rashid and Sultan Al Jassmey. Rashid fired a 283 while Sultan shot a 298 over the three rounds of championship golf.

Moving forward the teams will focus on the Emirates Golf Federation Order of Merit events and training camps that will be coming up. National team coach Samir Wallani said: “Our team chemistry was very good this week. You can see the players working together and encouraging each other on and off the course. We will continue to get better as a team and we will focus more on course management and shot selection. I am proud of the players this week, they have worked hard and it’s starting to pay off.”