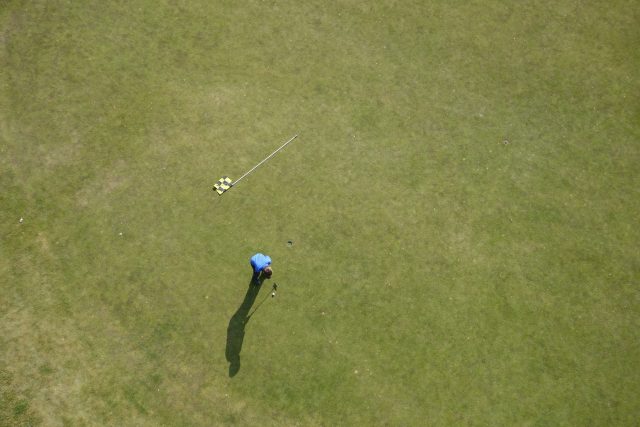 “Nice to have the extra day off,” laughed last week’s winner, as he made his way out onto the range ahead of this week’s European Tour event in Dubai.

Shane Lowry ended a three and a half-year victory drought as he secured the prestigious Abu Dhabi HSBC Championship last weekend – his last tournament success coming at the WGC Bridgestone Invitational back in August 2015.

The first of this season’s Rolex Series events, the one-shot win pocketed over €1million for Lowry, and in turn catapulted the Offaly man to the top of the European Tour’s order of merit, the Race to Dubai.

More significantly, the win at the United Arab Emirates event hoisted Lowry back inside the world top fifty, which opens up a string of valuable tournaments to pencil into his schedule over the coming months.

Should the Clara man stay inside the top 50 by the end of March, a prestigious invitation to the Masters will be forthcoming.

But it could have all ended in tears.

Actually, tears were probably shed, as Lowry stood victorious on the 18th green, having just fought back from a four-shot deficit to edge South Africa’s Richard Sterne to the title.

Lowry had led the tournament throughout all three previous rounds and took a three-shot lead into the final day, where he would play alongside Sterne in the last group on the course.

Three holes in, the three-shot lead had vanished into the warm Persian air, and worse was to follow as a string of mistakes, including a hook drive into the drink, had Lowry playing catch-up before they even reached the turn.

By the 12th tee box, Lowry was remarkably four shots down. His opponent looked in total control and the task at that stage, against the careful and consistent Sterne, looked monumental.

Back-to-back birdies on 12 and 13 would begin the start of something special as Lowry’s famed iron play returned with a vengeance. Suddenly Sterne looked edgy and error prone.

All-square coming down 18, Lowry watched his opponent’s approach start right and continue into the crowd, finishing up on the car path.

Safety first could have been the motto for Lowry at that stage on the par five, that was playing every one of its 562 yards.

The season barely started, Lowry produced an early contender for shot of the year as he sent his three wood left, fading perfectly in off the 18th fringe to settle somewhere in the heart of the final green, about 20 feet from the flag.

Two putts later, the loveable Irishman was welling up on live television, trying to put into words the journey that he has experienced since winning the WGC in 2015.

An hour and a half up the Emirates coastline, Paul Dunne was, no doubt, by that stage, making plans for an occasion-fitting welcome home party for his training partner and temporary housemate.

Dunne and Lowry, a pair of European Tour winners, had taken a similar approach to the start of their 2019 campaign by renting a house in Dubai for a course of warm-weather training to put them in sync for this Desert Swing section of the European Tour.

Stage two of the the three-tournament Persian Gulf tour takes place this week in Dubai as the Omega Dubai Desert Classic kicks off on Thursday on the Majlis Course at the Emirates Golf Club.

Lowry and Dunne will fly the flag for Ireland this week, which returns to the traditional Thursday to Sunday format, following last weekend’s tournament, which finished on Saturday.

That extra day, of course, allowed Lowry time to reflect and recover, following such an emotional few days down the road in Abu Dhabi.

And the four-time European Tour winner looked ten feet tall as he meandered his way about the range in Dubai taking time to take the plaudits from all corners of the practice area.

“Has he quit? Won too much money?” ponders Robert Rock regarding Lowry’s caddie Bo Martin, who enjoyed his first win on the bag of the Offaly man.

We love the camaraderie on our Tour…

Listen in as Shane Lowry returns to the range to a lot of ‘congratulations’. pic.twitter.com/SShA0DMIlr

Lowry looked like a man very much content with his lot in life, the win made even more special having his wife and daughter waiting greenside in Abu Dhabi.

So expect to see Lowry contend again this week on a big-hitter’s course that suits a player who can fade the ball.

Lowry should really be at his cavalier best this week and will embrace the added spotlight that will be shone his way in a field that contains seven major winners, including Henrik Stenson, Sergio Garcia, Louis Oosthuizen and three-time winner Ernie Els, as well as PGA Tour stars like Bryson de Chambeau.

A host of Ryder Cup players will also be competing with Tommy Fleetwood, Ian Poulter and Lee Westwood in the field, while there is also a nice blast from the past with multiple order of merit winner Colin Montgomerie teeing it up.

“I have really enjoyed the last couple days and I’m going to try and enjoy this week as much as I can,” said Lowry, speaking on the European Tour website here.

“The morning after you won when you wake up is pretty nice in that feeling. It’s just something that you would like to just hold and keep with you forever. It’s been great.

“[Dubai] suits a left-to-right shot, which is what I have. If I keep playing with a bit of confidence, we’ll see what happens.

“I came out on January 3. Myself and Paul Dunne rented a house and my wife and baby came out as well and we did a lot of practise. The weather is perfect.

“We’re eating, just chilling and enjoying the day then getting to work. It’s been lovely and I can see us definitely doing it again in the future.”

And perhaps Dunne can take the baton from Lowry and run with it this week; the Greystones native missed the cut in Abu Dhabi but will be looking to feed off his housemate’s good form and fortune in Dubai as he looks to move inside the world’s top 100.

Rory McIlroy, meanwhile, finds himself across the other side of the world this week as he tees it up at Torrey Pines for the PGA Tour’s Farmers Insurance Open.

McIlroy pushed last year’s winner Haotong Li all the way in Dubai in the 2018 edition but the four-time major winner has opted for a significant change to his calendar this year, putting real emphasis on the PGA Tour and America.

A man who rarely needs nor looks to others for inspiration, no doubt, McIlroy will be looking to emulate his good friend, Lowry, in his quest to end his own mini-drought in California this week.

McIlroy’s last victory – his only win in 2018 – was secured in March at the Arnold Palmer Invitational, however, if the Holywood native shows the form that put him in contention earlier this month at the Tournament of Champions, he has every chance of returning to the winner’s circle.

The former world number one’s game looked to be in rude health in Haiwaii with McIlroy’s putting looking especially exquisite.

Of course, Rory must tame the Tiger this week, amongst the other stars of the PGA Tour, including world number one, Justin Rose.

Seamus Power is also in the field at Torrey Pines, however, the Waterford native had endured a tough start to the season, missing the last five cuts in succession.

Woods, meanwhile, is looking for win number eight at the Farmers Insurance Open and is hoping to pick up where he left off, securing the season-ending Tour Championship last September.

“A lot of it (off-season) has been training, trying to get stronger.

“Last year, towards the end of the season, I got really tired because I didn’t expect to play that much golf at the end and I didn’t train for it.

“This off-season, I spent a lot of time in the gym and I’ve got a lot stronger and feel like my legs are there where they need to be, which they weren’t at the end of the season.”