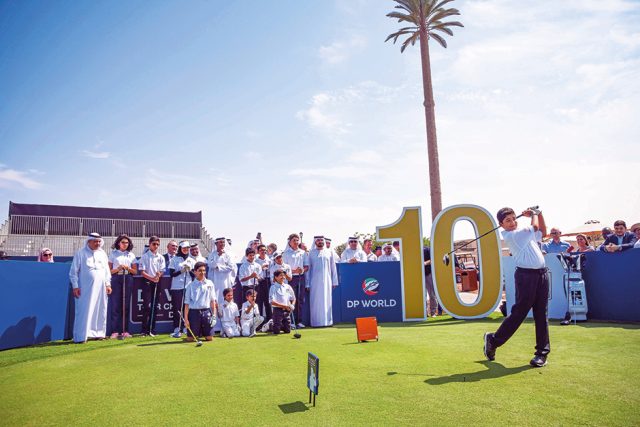 The next generation of UAE golfers took part in a series of ceremonial tee-shots to mark the one-month countdown to the 10th DP World Tour Championship at Jumeirah Golf Estates on Monday.

Future stars from the Emirates Golf Federation’s National Junior Development Programme were invited to tee off to highlight the positive impact that DP World’s investment has had on the sport since it first hosted the European Tour’s season-ending event in 2009.

The first tee shot was taken by 10-year-old EGF junior Sultan Al Jassmy followed by his brother Rashid Al Jassmy, both of whom are products of the DP World-supported EGF Arabic Schools Initiative which has seen almost 4,500 juniors introduced to the game since 2015. The siblings are in contention for a place on the UAE Under-15 team that will compete in the upcoming Arab Golf Championships in Morocco. Shaikh Fahim took the next shot followed by representatives from each of the event’s key sponsors. The longest drive was by Stuart Pain, business development manager from Atlantis Hotel at 293.4-metres, while the straightest drive was by 15-year-old EGF junior Shahad Al Suwaidi.

This year’s DP World Tour Championship, November 15-18, will see the top-60 players on the European Tour’s Race to Dubai rankings play in front of 65,000 spectators and a further 500 million following on TV. Entrance is free.