Jyoti Randhawa, who was ranked in the world top 100 between 2004 and 2009, was taken into detention at the Dudhwa Tiger Reserve in Uttar Pradesh state. 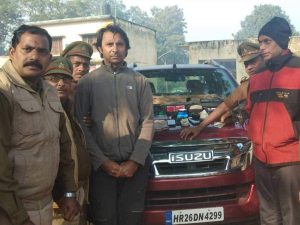 “Jyoti Singh Randhawa and Mahesh Virajdar have been arrested for poaching and unauthorised entry in a forest area,” Pandey said.

“A vehicle, weapon and other equipment have been seized with the skin of… (an) animal and a dead junglefowl.

They have been sent to jail and further legal action is being taken.”

Randhawa took up shooting as his golfing career faded after winning the last of his eight Asian Tour titles, the Thailand Open, in 2009.

Media reports last month said Randhawa has a pack of hunting dogs that were used during the search for a man-eating tigress who was shot dead in the western state of Maharashtra.

Khan, one of the world’s highest-paid actors, was convicted this year of shooting dead two rare antelopes on a hunting trip in Rajasthan state in 1998.