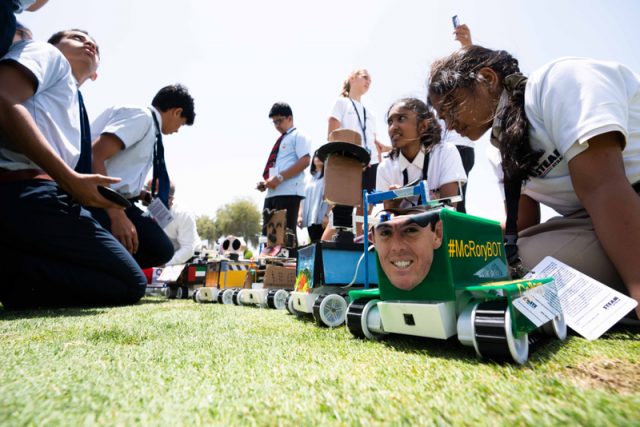 With the rise of AI and technology, the future of learning is a concept that is slowly being embraced in the UAE as the first ParOne Invitational STEAMathalon takes place in Dubai this week on April 25-26.

Teams from 20 schools across the emirate are coming together at El’s Club in Dubai to showcase their very own artificial intelligence GolfBot and compete against other innovative learners from around the country.

Students are scored on innovation, creativity, sustainability and positivity and are given points for their AI projects. “Around 40 per cent of the overall score is based on the AI golf competition where their GolfBots are put on a putting green and without human intervention, the machines must locate the ball and place it into the hole,” Aditya Tangri, Co-founder and CEO of Kalebr Americas and Founder of STEAMathalon told the media.

Each team includes six students — the team principle, head of engagement, head of marketing, head of technology, head of design and head of engineering, along with one teacher from their school to supervise the process.

“The students are asked to do four things, one of which is to create a persona behind their miniature model such as Harry Potter or Angry Bird, which shows their creativity, imagination and language skills,” said Tangri.

When building their GolfBot, students must think about sustainability and use the right materials to make their projects come to life.

Teams must also ensure they have a following on the online STEAMathalon platform where they have the chance to showcase their GolfBot and gather votes.

“So far we have 10,000 visitors from 70 countries voting on the platform. The teams can also invite people on the tournament day on Friday to physically vote for them, which gets them 500 points per person,” said Tangri.

During the tournament, teams will be given a score by a panel of three judges in a press conference setting through an informal Q&A session. Each team’s teacher along with one nominated student will also get the chance to gain extra points by attempting to get a golf ball into a hole in under 60 seconds.

Aiming to empower and engage students with 21st-century workplace skills, the grassroots premise of STEAMathalon is that learners discover, innovate, market and celebrate.

“This is what the future of learning looks like — taking students out of stressful environments and bringing them to unexpected places that have now turned into classes,” said Tangri.

What the teams have to say?

The participating team from the Dubai British School have built a GolfBot inspired by golf player Roy Mcllroy. Team member Emma H. said the students have been working on the project since the last quarter of 2018, and have ensured that it follows the concept of sustainability. “We have put a lot of effort in creating the GolfBot and used proper Dt tools to cut out the plastic and materials,” she said.

Her team mate Jack F. said their model is green as a symbol to the UAE’s efforts and plans to becoming more sustainable in the next few years. Supporting them is assistant head at the school, Niel Oats, who believes the competition has offered the students the chance to gain skills that are not offered in traditional learning schemes. “We still have a knowledge-based curriculum and we still have classes learning about math, science and technology, but to be able to take the students out of that comfort-zone and put them in a completion-based element where they are able to compete with each other, work as teams, and collaborate, is the sort of 21 century skills that most students should develop,” he said.