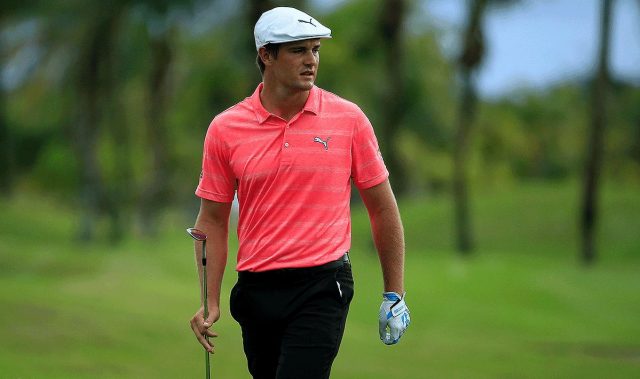 Bryson DeChambeau returns to the Dubai Desert Classic three years after his debut as the top-ranked player in the field at world number five, but the American has made it clear that he is far from satisfied with his meteoric rise.

The 25-year-old, popularly referred to as the ‘Mad Scientist’ because of his use of scientific methods in trying to improve his game, was the leading amateur and shot 12-under par on his first Dubai appearance in 2016.

However, he is one of the hottest players in the professional game right now, having won four times on the PGA Tour last year, including three in his last eight starts.

DeChambeau headlines a stellar field in the tournament, which is celebrating its 30th edition this year and starts at Emirates golf Club on Thursday.

Played the front nine today @EmiratesGC and took in the views on 8. The course and it’s views are 👌🏻 this week. @OMEGAGolfDubai @EuropeanTour pic.twitter.com/WEOijmo31x

All of DeChambeau’s six wins as a professional have come on American soil and he quickly established what he wanted to achieve, saying: “It’s an honour to be back here and super excited.

“Obviously, played well on this golf course here a couple years ago. Didn’t putt very well but I think we figured out why for this year.

“I am looking forward to a really good week. The game is in great shape… I am hitting it well, putting it well. I’m honestly just excited to try and capture an international victory. That’s really what I want to do this week.”

Winner in back-to-back weeks of the FedEx Cup playoffs in 2018, DeChambeau said he is still not satisfied with the progress he has made since his last visit.

“For me, it’s not necessarily about being the number one. I mean, that’s the result of all the hard work, right? But for me, it’s more about understanding the game at a whole other level that’s never really been done before.

“I want to achieve different insight into all the different variables that go through you having to adjust properly to the course at hand.”

China’s Li Haotong is the defending champion this week in a field that also includes 2017 champion Sergio Garcia.

Garcia is enjoying a great run of form and has not finished outside the top 10 in his last six starts, including a win at the Andalucia Valderrama Masters.

“I’ve always looked at it that you can’t get victories without being up there and finishing in the top 10 or anything like that,” said the 2017 Masters champion when asked if he was frustrated his form and consistency has not led to more wins.

“If you’re fighting to finish 25th, you don’t have a chance of winning. Winning has become tougher and tougher as the years went by… all the kids are much better now than they used to be.

“At the end of the day, the only thing I can do is give myself the best chance and try to play the best way possible. If I’m around the top 10, I have my chances of winning. If it happens, great, and if not, it’s still a great week.”