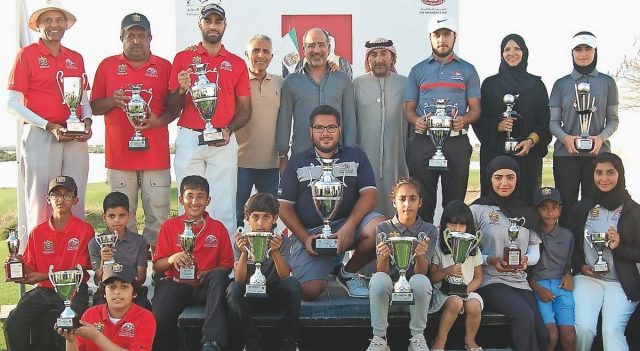 Yousuf fired consecutive rounds of 71 for a championship total of 142, two-under-par.

“It was great to win the UAE Presidents Cup again after a long hiatus. I managed my game extremely well and was able to play very consistently over the two days”, Yousuf said after raising the trophy for the first time since 2015.

“The team at Yas Links did a great job with the course set and running the event very smoothly. With over 110 players competing in five different divisions, it’s always tough for operations but Yas Links continuously manages top-level championships” Yousuf added.

Taking the runner-up prize with rounds of 75 -70 for an event total of 145 was Abdalla Al Musharrekh. Abdalla started a bit slow but with a 70 on the final day he, was back in contention. That 70, two-under-par final round also gave Abdalla the runner-up position by having the better day two result.

Coming in Third Place, was Ahmed Skaik. Ahmed also finished with a total of 145 for the event and after his second place finish last year and now third place finish this year, he will have his eyes fixed on champions’ spot next year.

The event also presented players with the chance to win a Net Prize. The overall Net Winner for 2019 was Abdul Rahman Al Laggiti with net scores of 69 – 64 for a championship total of 133 net.

Winning the Ladies Division for the third year in a row was Reema Al Heloo. Seems to be a yearly trend but with many new ladies in the National Junior Development Programme, Reema will have her work cut out for her in a few years. With that being said Reema continues to get better each year as she fired an event total of 158 gross score, nine shots better than last year.

The Ladies Overall Net winner was Dr. Rabab Al Haj with a net score of 153.

The Junior Division was played over 27 holes, which saw 10 competitors. This is the largest Junior Field since the event has started. Walking away with the 2019 Junior Division title was Sultan Al Jassmy. Sultan shot a championship total of 140 to claim his first ever UAE Presidents Cup victory.

Winning the runner-up prize in the Junior Division was Rashid Al Jassmy with a championship total of 152 and taking home the third place prize was Shahad Al Suwaidi.