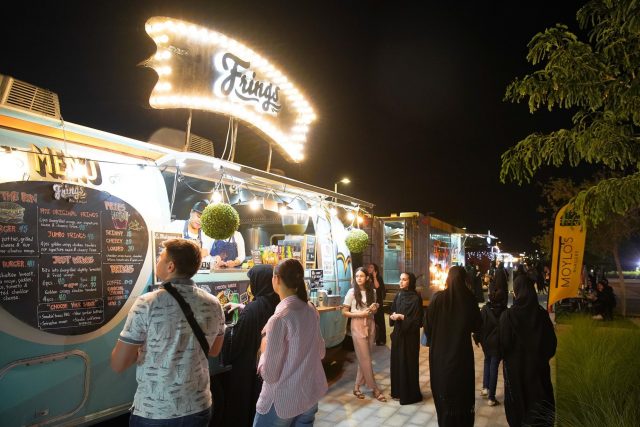 There is a festival for just about everything is there not? Having covered the entertainment beat across the UAE for the best part of a decade, it has become obvious to me, as I am sure it has to everyone else, that if you want to celebrate trainers there is SoleDXB. Love books? There are actually three events suitable for that – in Abu Dhabi, Dubai and Sharjah – each one packed with millions of tomes. If it is Chinese New Year, Swiss National Day or Fiesta de los Muertos, yep, you guessed it, there is a festival for those, too.

It is for this reason that I was not super-surprised when it was announced that something called The Big Grill Festival was to have its first outing at Yas Links Golf Club.

Dubbed a celebration of all things smoky and meat, I figured I should pay a visit and get some tips on how to up my George Foreman grilling game. “There are plenty of YouTube tutorials,” one of the attendants at the Jamaica Shack told me as he prepared my jerk chicken plate. “You can even make this jerk chicken on the Foreman, you just need to find the right sauces.”

I came across another vendor who was fielding more serious enquiries. Aadil Datta was representing a company that imports wood for use on barbecues or for camping. He explained to me some of the key points he was pushing to potential customers. “Education is needed when it comes to barbecues,” he said wisely. “When it comes to the fire, I tell people that oak, because of its scent, is best. Burcher wood is for camping.”

I do not think Datta would have minded that most of those who attended the inaugural Big Grill Festival had done so for completely selfish reasons, though, which probably had nothing to do grilling. And for many, it was just another one of those fun family days out that Abu Dhabi has come to specialise in.

The one stand that had no love at all from the punters, however, was that of a hospital whose staff were offering free diabetes check-ups. While their good intentions were noble, their stand clearly was not in the vibe of the rest of the festivities and it was being avoided at all costs.

Nevertheless, this event offered up a wonderfully communal atmosphere that truly celebrates the diversity of the city. Sitting on the beanbags on the grass were – refreshingly – not the usual concert crowd. There were Lebanese and Filipino families, a large group of South Africans and Italian students. And they all came together in the last hour of the festival to enjoy the reggae vibes of American band Big Mountain. It was positively joyous to see families who probably rarely go to a concert as a unit, dancing along without a worry in the world.

“We may not always have the super-big events in Abu Dhabi, but one thing I know is that it will be family-friendly,” said Kareem, who lives in Khalidiyah, and who had joined in the fun with his wife and toddler.

“When you have a family, that’s what you want really; places that are safe and that we can all enjoy.”

And from the festivals that take place at Umm Al Emarat Park to the capital’s latest green space, Reem Central Park, Abu Dhabi continues to offer just this, appealing to families in a whole host of different ways that never get old.